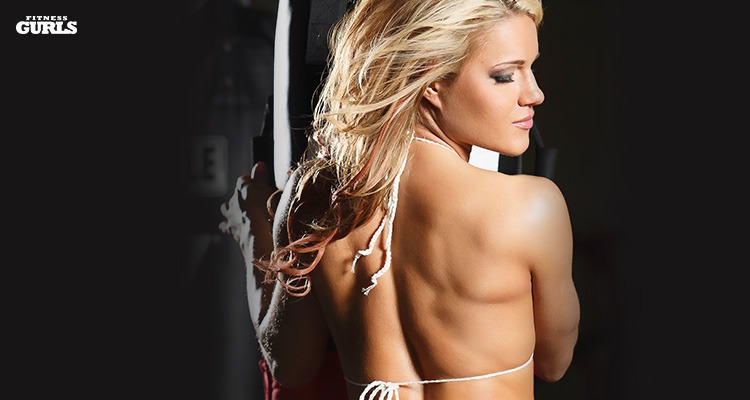 How did you get started in fighting?
I grew up watching my Dad in martial arts. It was always something I was interested in, that and many other sports. There were 5 kids in my family and not a lot of money to go around so I never got to participate in sports, despite being really athletic. I worked pretty much full time all through high school and when I was 18 I still really wanted the chance to be able to compete. My brother in law taught kickboxing classes So I went in. The first day I was there all the fighters were getting ready for a national tournament. From day one I knew I wanted to be a fighter. I had my first fight 3 months later and the rest is history.

When was fitness start becoming important in your life?
Fitness was important to me since I was in 6th grade. I always remember watching my dad train my entire life. He was a body builder and martial artist. He was really healthy, always reading the health and fitness magazines. I remember I had these 5 pound dumb bells. I use to use do all my own little workouts with them and when I developed a little bicep I just thought it was the coolest thing. I became obsessed with getting a 6-pack and remember I would do 1,000 crunches over night. I’m a very obsessive person so thats when I knew health and fitness was always going to be a huge part of my life. In fact its around that time I dreamed of becoming a fitness competitor rather than a fighter.

You’re going to be on The Ultimate Fighter 20. This is the first time StrawWeights will be in the UFC. How big is this opportunity to not only be on the show, but to be in the UFC?
This is every fighters dream, and a few years ago women were not even in the UFC and Dana White said they never would be. Whoever wins the show will be the first ever UFC straw weight champion and that right there is huge. As much as I would love to win that belt and have been doing everything in my power to make this a reality I’m just really excited for this opportunity. Once again women are making history and no matter what I can always say I was the first set of straw weights in the UFC and on the very first cast of all women fighters on The Ultimate fighter. That in its self is an accomplishment. I”m not trying to focus on the outcome just the journey at this point. My mind is in a good place right now and at the end of the day I’m thankful to be living out my dreams and doing my passion.

What is your fighting style for people that don’t know about you?
Well that’s a tricky question, I wouldn’t claim to be the best in any particular style like
striking, BJJ, or wrestling but I do believe I am one of the most well rounded straw weight right now. I did start off as a kick boxer 11 years ago and racked up many kickboxing titles as an amateur and pro but I have evolved so much through out the years. Especially when I started training at Team Curran 5 years ago. They’ve gotten my ground game up as far as the jiu jitsu goes and also with my wrestling as well. I train hard and I’m determined. For me it’s always been important to become a well rounded fighter and I am comfortable on the ground and on the feet… If I put together the tools I have developed I’m gonna be hard for anyone to handle. I am very aggressive. I was given the name “Lil Bulldog “ for that reason. No matter what I come to fight and I don’t back down. I take the fight where ever it needs to go to win and don’t just rely on one skill set.

What does your diet consist of?
I’ve always been really healthy and I’ve done it all. I was a raw foodist for about 1 year and then a vegetarian for 2-3. Right now i’ve been working with a really well known and sought after nutritionist Fakhri Mubarak and all my meals are prepared for me by a company called Fuel-up. So everything is perfectly proportioned out for me. I’m not going to go into complete specifics about my diet because thats my little secret. But my Fakhri has based my current diet on my blood work and on getting me to the lowest weight I can be with the most amount of muscle and strength as possible, with a specific ratio of carbs, proteins and fats.